Friday 5 for July 13: The Road to H. E. Double Hockeysticks

Happy Friday the 13th. The following questions are from Scrivener's weekly Friday 5 blog.

Here are the questions and answers: 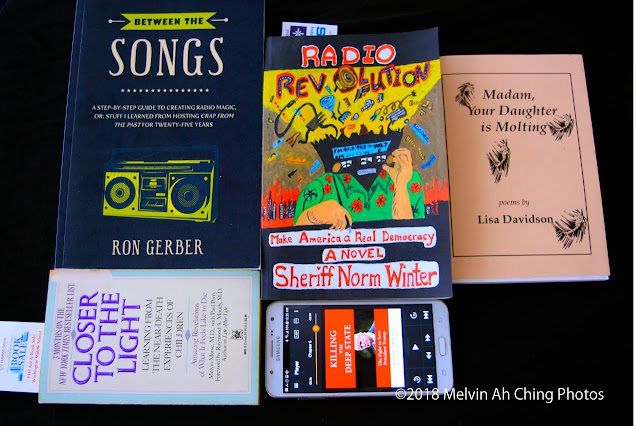 1. What are some titles in your to-read stack?

Funny thing about books, I tend to read one for several chapters and then skip over to another one before I continue, sometimes much later, finishing up the book I started to read....

"Closer to the Light" by Melvin Morse, MD. - in progress
"Madam, Your Daughter is Molting" by Lisa Davidson, a collection of poems - read most but not all
"Radio Revolution" A novel by Sheriff Norm Winter - in progress
"Between the Songs" by Ron Gerber (Crap From the Past radio host / KFAI FM)

Got a bunch there, mostly freebies that I downloaded but haven't gotten around to read yet.

"Cyber Storm" by Matthew Mather - I hope it is not the beginning of a series.*
"Far From the Madding Crowd" by Thomas Hardy
"Autobiography of Benjamin Franklin"
"Alice's Adventures in Wonderland" by Lewis Carroll

Many others, mostly political, scifi or books in the public domain.

I got so many here that I cancelled by Audible just so I have time to catch up with what I have. I also have a bunch of freebie books saved in my LibriVox library.

"Dune Unabridged" by Frank Herbert + the 2 other books he wrote in the long going series. I read the originals in the 1970s. Want to re-read these again. I wonder why this book is unabridged? As I recall the story was long... so what did I get back 40 years ago? A shortened version??? I don't want to think about it.

* Lately I hate reading new scifi books and other modern novels. A lot of them are set up so that they get you hooked to read sequels. Ugh. I want a good book with a great story that has a beginning, middle and end and that's it. No more sequels.... (I did make an exception for the Dune series.... never read "Lord of the Rings" but seen the movies... read "The Hobbit" but did not bother watching the movies... go figure).

2. What are the highlights of this weekend’s to-do list?

I do not make any physical "to do" lists.

3. Which current or upcoming movies are you looking forward to?

Movies are SO EXPENSIVE these days to watch in a theater. I don't keep track of them anymore since I rarely go. I am a big STAR WARS fan, but guess what? I haven't seen the latest installment, SOLO: A STAR WARS STORY. It's probably gone from the theater now.... I will probably watch it someday on DVD or a stream. Sadly, I missed the last installment of the current PLANET OF THE APES trilogy. I haven't gotten the DVD or watched on TV.

The only movie that I am looking forward to doesn't come out until next December 2019....

Drumroll please... STAR WARS 9: WHATEVER IT IS CALLED.... yep... and you know what.. this is the LAST STAR WARS movie that I will pay to see in a theater. It is probably also the last one I will get somewhat excited about. I have no problem with the stories moving forward and all that with new characters. It keeps the series fresh. But at my age, waiting another 9 to 12 years for the next trilogy to play out is probably not very prudent, given my life is about 2/3 over. I am getting older and who knows how long I will be around on Earth.

Lately too, my attention span towards movies or long form entertainment is not as great as before. I don't know why. Anyone want to buy some DVDs from my collection?

4. What’s something you meant to do this past week that will have to wait until next week?

It would be something I did not do this week and put off to next week. If I had to tell you this, the information would not be private. So hence that is known only to me. Sorry!

5. What’s an unfinished project (unrelated to media consumption) you haven’t touched in at least a year?

Clean out my storage locker that is costing me too much money. Need to get rid of 20 to 30 years of negatives and old photos. Should I toss them or give them away? I also have a Mac Plus computer and a bunch of stuff I need to rid of... probably sell.... all kinds of crap in there. I need to downsize even more... though I feel sad to think I got rid of a bunch of records and CDs from my collection a few years ago... The CDs I don't miss but some of the vinyl, I realize now, I do miss.... despite still having about 300 LPs in my current collection.

So Scrivener, in answer to last week's comment... yeah I figured out the items was for trail mix... which I don't buy if it has raisins in them!

And with that,  I am outta here. Bye!

What in hell is ASLIRT? Gonna have to look that one up. OK.. on Google it says ASLIRT "is not a valid Scrabble word".... if it is an anagram then you can get the words TRAILS and TRIALS from it.... so I guess these questions are a trial? I have no idea!

Anyway, from the Friday 5 page by S.

1. What are your favorite and least favorite nuts?

Least favorite: Brazil Nuts... they are ok but are a bitch to open and dig the stupid nut out.

2. What are your favorite and least favorite berries?

Favorite: Strawberry
Least favorite: Probably black berry or anything that is poisonous.

3. What are your favorite and least favorite tropical fruits?

Favorite: My all time favorite is grapefruit... unfortunately I am prohibited from eating that due to its bad interaction with medication I take. Bummers. Citrus fruits do grow in the tropics, right?

Otherwise #2 would be guava and #3 banana.

Least favorite: I love lemons but I hate lime. Are those tropical? If not I don't really care for papaya.

4. What are your favorite and least favorite varieties of m&ms?

Worst: Whatever the stupid new concoction is... did they have a coconut one at one time?

Here is a dumb question. Why are M&Ms as a brand name in all caps when the candies themselves have lowercase "m" on them?

5. What are your favorite and least favorite raisin-containing foods?

Favorite: Huh are you kidding. I HATE RAISINS.

Least favorite: Raisin Bran cereal... I like the flakes but I will laboriously pick out those fermented grapes one by one before I pour milk on the darn thing to eat it. Ditto for Oatmeal Raisin Cookies. Ugh.

Going back to #4, at least M&M / Mars did not make an m&m candy with raisins in them. There have been other ones like Raisinets which I avoid like the plague.

These are the answers to the annual Scattergories Friday 5 questions. So what letter did the "nifty online random-letter generator" give to me this year... Hmmmm.

I wrote most of this post last week but could not decide on question #5.... so here I am one week later answering this.

1. What’s a movie you love whose title begins with the letter?


For the letter "W" this one is easy: The 1953 George Pal science fiction movie of the H.G. Wells story, War of the Worlds. Long long ago when I was a kid, the movie scared me. Over the years I have watched War of the Worlds and have never ceased to marvel at how great the special effects were, especially considering this movie came out when each effect had to be painstakingly produced using stop motion techniques and models. Combined with cool lighting, good acting, an interesting plot, the Martian invasion of Earth looked very scary and convincing. To me this movie is far superior to all other versions that have come out since, including the big budget Steven Spielberg edition that came out in 2005. Needless to say I own this movie on DVD and watch it at least 2 or 3 times a year.

I did read the book which took place in Victoria era Britain.

2. What’s a popular tourist destination whose name begins with the letter?

Um... about a mile away from where I live there is WAIKIKI BEACH and the entire resort area of Waikiki. Yep, it is super crowded there every day, but as far as popularity goes, it is one of the most popular places in Hawaii. To anyone who has not been to Hawaii, come here... spend your money... visit Waikiki and all of the other destinations around our island state.

3. What’s something you do, whose name begins with the letter, when you’re very happy?

In my life I am mostly an "observer" vs. being a "participant" in a lot of things. Usually with a camera around my neck I like to observe and photograph people, places and events. If I had to use the letter W to describe this I would say WATCH stuff...  It is a broad generalization, but I could not think of anything specific to the letter W.

4. What’s a frightening animal whose name begins with the letter?

I had to look it up here for the letter W. I am going to fudge this one a bit, but my first frightening animal that starts with the letter W is:

Why? Simple. If given the chance, a Great White Shark can eat you. That doesn't sound like much fun. My solution to not become shark bait is simple: STAY OUT OF THE WATER!

Runners up: White Tiger, Wasp, or any carnivorous animal name that is preceded by the description WILD.... Wild Lion, Wild Cheetah, Wild Leopard, Wild Tiger, Wild Dogs, Wild Snakes, etc. Anything wild that can consume a human being is frightening.

5. Who’s a person you admire whose name begins with the letter?

I can't think of anyone except for maybe George Washington who was the first President of the United States. I am reminded of him every time I pick up a quarter or a dollar to spend.
Posted by Mel at 12:00 PM No comments: