WHERE DO I GET MY NEWS is the subject of the questions in this week's Friday 5:

1. Where do you get most of your information about current local (Hawaii) events?

The shrinking size of local newspapers are a signal that their days as a news and advertising medium are numbered. I think we'll be getting most of our news in the future from the internet, if not already. Surely many internet resources are dubious, but we want it for free and if a Tweet passes for news, then so be it.

2. Where do you get most of your information about current national and international events?

Since I am the only family (myself) here on this island, I get news from me... otherwise on the Big Island, my mom.

4. Who at work (or school) always seems to know what’s going on?

Usually myself, my boss, some colleagues

5. What other kinds of news do you try to keep up-to-date on and where do you get it?

Most of my alternate news comes from the internet - RSS feeds, websites, Twitter feeds, some Facebook and blogs.

Fallen by the wayside: magazines, other newspapers.

Got a problem with the links? Don't click em!
Posted by Mel at 4:30 AM No comments:

1. What are your feelings about milk?

I don't quite care for it, although I like milk products such as ice cream and milk shakes. See the tasty picture above... best way to have a milk product... ice cream or ice milk sundae in this case... at McDonalds'.

2. What are your feelings about cheese?

It's good with pizza and spaghetti. I don't over do cheese.

3. What are your feelings about yogurt?

I don't care for it.

4. How do you feel about soy milk?

Nope, that is not for me.

5. How far are you from the nearest cow?

There are some probably in the rural areas of Oahu... maybe about 20 miles or more away.
Posted by Mel at 6:30 PM No comments:

I guess everyone who eats has an opinion on what and how we eat. Here's my responses to today's Friday 5 "Eat & Drink" questions.

1. What’s something you will not eat unless you also have ketchup?

I usually like to have ketchup with Meat Loaf.

2. What’s something you will not drink unless it is served on ice cubes?

I like cold drinks but I do not require ice cubes all of the time. Ice cubes are nice when they are available, especially if you can control how many cubes you put in your drink. I do soft drinks only. No alcohol for me.

That all said, I hate when you go to a food place and the cup is filled mostly with ice cubes and not too much soda. Eating places make a lot of money selling soda with mostly ice cubes in them.

3. What’s something you will not eat unless it is served between slices of bread?

4. What’s something you will not drink unless you have a straw?

Icee! I like the red straw with the scooper at the end. Strawberry icee is my favorite.

5. What’s something else you will not eat except under very specific circumstances?

Beets - unless it is the last food on earth that is available.
Posted by Mel at 5:30 AM 1 comment:

Starting with this post, the new home for my "Friday 5" blog responses is here.

I started posting Friday 5 responses to my main blog, but after a while I felt some of the categories did not fit in with the more political, technical and life stuff that I write about there. So for a few entries I used my Tumblr blog. Tumblr is limited, so I decided, hell Blogspot offers its users an unlimited amount of space to post a blog... so here I am, with a new blog just for the Friday 5 answers.

I'll be posting the first entry for Friday June 5 here and will drag my earlier entries to this area in a few days.

Without further delay, here is my Friday 5 response to.....

1. What bugs truly freak you out? 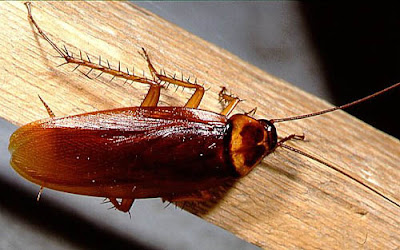 COCKROACHES - especially the big brown, ugly American Cockroach. I hate when they fly, walk upside down on my ceiling and worst land on me. When you try to kill them they have a hard time accepting death, and usually run away when you squish em.... only to find them dead in some nook or cranny days later.

2. Which Bugs Bunny cartoon do you remember most fondly?

While I like the entire stable of Warner Brothers cartoons better than anything from Disney (too goody goody) and Hana Barbera (awful mostly), I can't exactly place a favorite Bugs Bunny cartoon. I generally like the Road Runner and Coyote ones better. That said any cartoon where Bugs would harass Yosemite Sam or Elmer Fudd are always good ones.

3. What bugs you most about your life online?

A. Spam
B. Instrusive Pop Up and Pop Under Ads
C. Intrusive Pop Ups @ Yahoo that ask me to chat (just defeated that)
D. Overuse of unnecessary FLASH.
E. Flash introductions to websites before they let you in to see the real content.
F. Phishing Schemes
G. People who pass on long chain emails with everyone's addresses in them.
H. Friends & Acquaintances who love to pass around junk emails and jokes without using BCC.
I. Tiered internet pricing
J. Cookies
K. Attachments I never asked for.
L. Streamline Tax - Internet Taxation - coming soon because of liberal Democrats and Obama
M. DRM
N. Netflix Pop Under Ads - like dog shit on your desktop
O. Websites that demand I punch in my cell phone number to get a text message. Hello? I don't own or use a freakin' cell phone!!!!!!!
P. Paying for content that was once free.
Q. Underlining links and text
R. Ugly crap on MySpace.com
S. Apparent long term freeze at Finetune.com
T. Disappearance of Muxtape as we once knew it.
U. The always changing TheSixty-One.com website and their now lousy flash based, points based download system for some songs.
V. I spend too much time online.
W. Not enough free wifi hotspots in my city.
X. Message board sites with too many liberal viewpoints.
Y. Some of my friends are not online yet... sheesh. Can't deal with luddites.
Z. People who don't want to upgrade their operating system and be on some websites for their own good.

With all those bugs, I can't fathom why I continue to pay and use the darn internet. Makes me want to go back to the good old BBS days when things were a lot simpler even though they were slower.

4. Which of your favorite websites seems often to be especially buggy?

Honolulu StarBulletin.com - Around September of 2008 they started using a lot of pop over and pop under advertising. It is extremely annoying when flash based pop ups block the content you want to view. And in some cases when you press the so called "close box" on the offending ad, instead of closing it takes you to the advertiser's website! StarBulletin.com... you are an asshole for instigating intrusive pop up and pop over ads on your content. Use of the mobile site is recommended.

Finetune.com - Once my favorite streaming website that let users create an unlimited number of mixes using popular music and letting users embed those mixes in blogs and websites... Now the entire site is frozen. Our content is still there but we cannot do nothing with it except listen. I strongly suspect this is not entirely Finetune.com's fault but has something to do with the evil RIAA.

MySpace.com - Some people's pages are so overloaded with crap, that they sometimes freeze my browser. Luckily I don't go there as often as I did now that most of my friends are on Facebook.

5. When were you last too sick to get out of bed?

Several years ago I was so sick that I was running out of bed and to the toilet so much that I got badly dehydrated. I had to go to the hospital for a day. They put me on a slow I.V. drip to get my fluids back!!!! It was awful.
Posted by Mel at 1:00 AM 1 comment: