Friday 5 for March 27: Without Lamps, There’d Be No Light

"One of my favorite movies of all time celebrates its 30th anniversary this year, and I had the pleasure to see it on the big screen for the first time Thursday evening. I was sixteen when it came out (yes; I’m 46), and too young to see it in theaters then, so although I’ve seen it on cable and DVD at least fifty times, this experience was a first, and it was incredible. So this week’s questions are inspired by that film."

1. When you were seventeen, how did you spend most of your Saturdays?

At home or with friends.

Cluttered if it was not vandalized.

3. When did you last have to replace a missing screw?

Can't exactly remember. If I take something apart I put the screws in empty 35mm film containers so that they don't get lost.

4. What was the last thing you drank out of a Thermos?

5. Do you still possess anything you created in high school (say, an elephant lamp that lights up when pull the trunk)?

I was on the high school yearbook staff, so that means I still have my senior yearbook from Herff Jones.... are they still in business? Their crummy book binding started falling apart shortly after we got our books. Josten's is better.

Video: "Don't You Forget About Me" by Simple Minds. The song was used in the movie The Breakfast Club as the closing credits ran on top of it. The track also topped the Billboard Hot 100 in 1985.

Molly Ringwald: Loved "Pretty in Pink" and I wish she had gone with Duckie. Haven't seen her in anything recent. 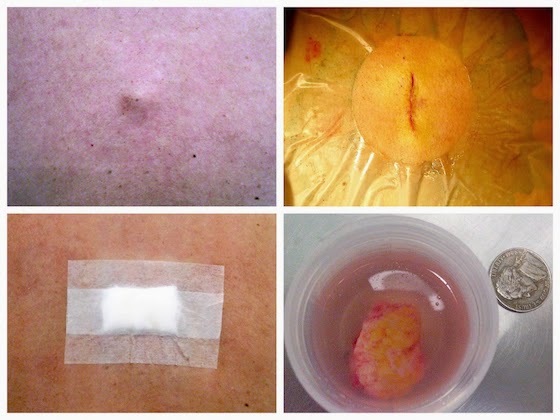 I saw this question last week, and meant to reply then since I recently had some stitches put in. A week late and a dollar short but now my response is up. Mmmmm.

1. Where on your body have you had stitches, and what were the circumstances?

You see the photos at the top and bottom of this post? Well those are the most detailed photos you'll see of me anywhere. Last year after what I thought was a giant zit on my back that bothered me for a few years, I decided to have it checked. The doctor said it was a cyst and that I could have it removed. So one day in late September 2014 I had the darn thing removed through a "minor" surgical process.

As you can see from the photos at the top the cyst was quite large. There it is in the little cup. Gigantic pustule that occasionally oozed from time to time when I had it.

Doctor removed it and replaced the incision with the stitches you can see above and below this paragraph. The top picture is of the first day. The bottom photos are of subsequent months... November, December 2014, and March 2015. Photos by the doctor's nurse on the first day, and by friend Lisa and sister Sandra. I took the photo of the cyst in the container with the nickel. It is located on a part of my back that I can't reach.

The hospital kept the pustule, examined it and declared it cancer free! Yeah. 2. Who most recently left you in stitches?

Myself and my sister several years ago after she noted the holes in my socks and we laughed about it a lot.

3. “A stitch in time saves nine,” says the proverb, which means that mending one small tear in a fabric now prevents having to make nine stitches later when the damage is worse. How has this been illustrated in your life?

See number one above if it is about me. Otherwise the other one I can literally think of is when my Dad had bypass surgery and he had big stitches all over. This was back in 1988. Doctors gave him another 10 years on life at that time. He lived longer than that and passed away in 2010.

4. What are your thoughts on Disney’s Lilo and Stitch?

"Ohana means family and nobody gets left behind." Loved  the movie; good storyline and it is based in Hawaii. What's not to like? It is the only Disney animated flick I have in my DVD collection. This was also the last movie I saw in the Waikiki #3 theater back in 2002.

5. What experience do you have with needle and thread?

I can sew a button back on to a piece of clothing. That's about it unless you consider the stitches story at Q1.
Posted by Mel at 7:26 AM No comments: