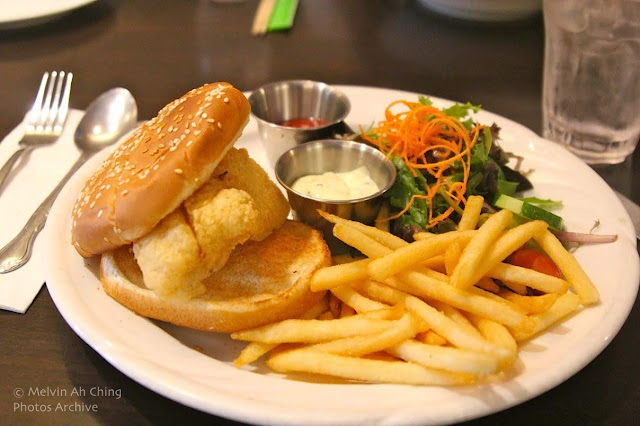 1. For the rest of your life, you get to dispense one condiment out of each fingertip of your right hand, defining “condiment” liberally. Which five do you commit to?

2. What is the best way to spiffy-up french fries?

Generally I take my fries plain... very lightly salted if possible, but if I do "spiffy up" basic ketchup is good. Maybe tarter sauce (as shown above) or sweet and sour sauce.

3. The restaurant is out of your favorite salad dressing. What do you order instead?

I can eat salads plain. Have no problem with it.

4. How do you like to modify your favorite heat-and-eat food?

I usually sprinkle pepper on it.

5. In what way do you play with your food?

If taking photos of food is playing, then that pretty much is the extent of it. Mother always said it is not nice to play with your food.

Of course when I first saw the topic title, I thought about this song:

1. What gets an unfairly bad rap?

I am going out on a limb for this one... The current President of the United States, Donald Trump gets a very bad rap from all the people and media who hate him and the kinds of policies that he is committed to "Make America Great Again".

Here is a short list of what our president has accomplished for America: https://www.whitehouse.gov/trump-administration-accomplishments/

This past week President Trump shook the hands of 1,000 U.S. Air Force Academy cadets at their commencement ceremony. This is a good thing. The graduates were totally thrilled by this. The President did not have to stay. The Secret Service and other people in charge of his schedule told him he could leave after shaking the hands of a few top graduates like what other presidents did before him. Trump would have nothing of that. He stood for a long time and honored each graduate. You have to admire him for that.

2. What’s something you’ve done to jazz up your routine?

I'm pretty content with my routine and generally do not do much to change anything unless I have to.

3. When did you last have your mettle tested?

I am trying to help my friend get out of a bad, ongoing situation.

4. What’s something you were once — but are no longer — hardcore into? 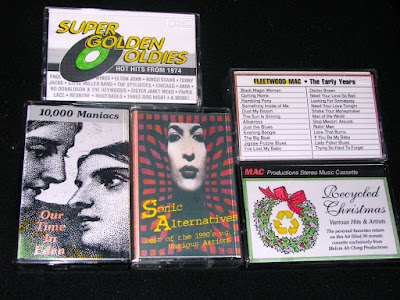 Recording compilation tape cassettes. I was very passionate about making custom mixes and even recording record albums in full length so as to preserve the record while playing the tape all of the time.

I used to make my own tape covers for them by hand and later with my Macs using at first Hypercard and later Aldus Pagemaker. Printed them out on a black and white laser printer and hand colored many of them. Later cassettes featured color inkjet art.

This changed after digital became a bigger part of our lives. Today I have tons of iTunes playlists and others taking the place of the mixed tapes I once made before.

This link takes you to photos of several of the cassette tape mixes I used to make: https://www.flickr.com/photos/macprohawaii/albums/72157612073240623

5. What are some porch swings, tire swings, or rope swings you’ve known?

Can't think of any in my life. Just never did any of that. I did ride regular playground swings when I was a kid.
Posted by Mel at 10:09 AM 1 comment: