Can I have some whipped cream on this?

Hello, and welcome to this week’s Friday 5! Please copy these questions to your webspace. Answer the questions there, then leave a comment below so we all know where to check out your responses! Don’t forget to link us from your website!

Water is a great food in and of itself. Just add water and you get water!

2. What’s your favorite thing to add vinegar to?

Nothing. I prefer to keep my normal food, normal.

4. What’s your favorite thing to add whipped cream to?

5. What’s something you refuse to add anything to, even though most people add something?

I keep on misplacing my iPod Shuffles among other things.

1. What’s something you frequently misplace?

Many items including wallet, keys, comb, scissors. scotch tape, pens, pencils, checkbook, TV & DVD remote controls and iPod Shuffle. Most of this stuff gets misplaced in my small, cluttered home.

2. For whom are you often mistaken?

No one that I know of.

3. When were you last misinformed about something important?

4. Where in your home do you have a seemingly random collection of miscellanea?

Desk drawers, closets, in boxes, in my car - yes, I have quite a collection of clutter. It is no wonder why there are so many storage facility warehouse places in Honolulu.

5. Upon meeting someone for the first time, what qualities in the other person are likely to cause you to misjudge him or her?

It depends on the person - perhaps their looks, what they have to say about certain issues....
Posted by Mel at 5:30 AM No comments: 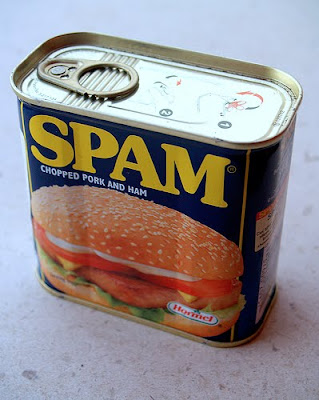 1. What’s something you wear only when you’re just about out of clean clothes?

Clothes of colors I don't like. I usually do laundry once a week, so this rarely happens.

2. Who’s someone you hang out with only if nobody else is available?

3. What’s something you eat only when the budget is really, really tight?

4. Who’s someone you call for help only if you absolutely must?

5. What’s something you’ll watch on television only because it’s slightly better than watching nothing?

The TV security image of our front lobby in my condominium on Channel 57. It is interesting to see who is coming and going or if the security guard is asleep at his post late nights. Single camera only one angle 24-7-365 days a year; no sound.
Posted by Mel at 6:00 AM 1 comment:

OK. I did not do Friday 5 the week before last, and this one is 5 days late... January 5. I guess its a good day to do a Friday 5 on a Tuesday which is the 5th day of the month and the new year.

1. What’s something that’s better when the newness has worn off?

My vinyl record collection. I appreciate many of my old records more today than when they were new years ago.

2. What’s something you already own that could stand to be replaced by the newer version?

3. What’s something that was better before someone made it “new and improved?”

Apple iPod Shuffle... I think the original gum stick design is the best. I have 2 of them and they still work fine. Apple really screwed up with the 3rd generation iPod Shuffle by making it too small (easy for me to lose) and moving all of the major controls to the ear bud cord... like um.. that is a bad idea because you cannot connect a third party headphone to the new iPod Shuffle without some kind of proprietary, Apple approved adapter or use the device to plug into a car audio or home stereo system... all of which I can do with my original model shuffle and 3 other iPods that I own without any proprietary adapter thingy.

4. Of geographic locations whose names begin with the word “new,” which seems like the most interesting place to visit?

I have heard that New Zealand is a very nice place to visit and take photographs.

Probably around the end of January... like say, January 21 onward.
Posted by Mel at 5:48 PM No comments: