I haven't seen any Spiderman movie since Spiderman 3 with Toby Maguire in the lead role from 2007. Questions from Scrivener's Friday 5 blog.

July 2017 HPD report to Ala Moana Neighborhood Board #11:

• Business Security Tips – Tips included installing a video security system, having address numbers visible from the street, and knowing the neighbors to watch out for each other.

Don Quijote – Ammons reported that a resident e-mailed him about loud noise and possible criminal activities at the laundry mat. HPD is aware of the situation and he will follow up with the Third (3rd) Watch.

2. If you could have attended one of those high schools with a specific academic focus, such as performing arts, studio arts, sustainability, science and technology, international languages and diplomacy, or some option you thought of yourself, which would you have chosen when you were thirteen?

Business and Technology - unfortunately they did not teach much of that in the government school system back in the day.... though I hear it may be worst now....

3. What was memorable about a party you remember from high school?

After our senior year dance we stayed at the hotel in Kona. We had some crazy party in the room and I remember calling one of our goofy teachers in the middle of the night (like 2AM in the morning) asking if his refrigerator was running. We were also jumping from bed to bed, playing loud music on the cassette player, eating and throwing chicken bones off the balcony of our 4th floor room or something. It was a long time ago. We were still stupid kids.

4. Which of your older relatives is (or was) the handsomest or prettiest?

My cousin Dorian was Miss Aloha Hawaii in 1972 and was first runner up in the Miss Hawaii pageant. Her talent was dancing the hula to the 1960s novelty song "Puka Puka Pants" that was recorded by JoAnn Campbell. She is a few years older than me.

5. What was homecoming like at your high school? How did you feel about it?

Homecoming was a big thing in small town Honokaa where only one government school serviced the entire area consisting of Honokaa, Waimea, Kukuihaele, Kapulena and Paauilo. Homecoming week consisted of something happening on campus daily for 5 days that led to the big football game of the season. We had like pep rallies, movies, intramurals and one year a gigantic water balloon fight. We also had a bonfire the night before the game and also a parade. Highlight for each class was to build a float and have it parade through town following the 2 bands from the community... the Honokaa County Band and the Honokaa High School Band. I was in the band. And then the big football game which as far as I can remember, our school always lost until 1973 and 1974, in which both years Honokaa was the Big Island Insterscholastic League (BIIF) champions. Honokaa's Class of 1975 which I was part seemed to win several of those parade float trophies or whatever as well as the pep rally stuff... probably because for our small school, we had one of the bigger classes at the time.

When the school turned 100 years old there was a large homecoming parade of a sort where a lot of the older classes showed up for still a special celebration. Some photos from that are shown below.

Honokaa town is laid out in such a way that it was always good to have a parade go through it. 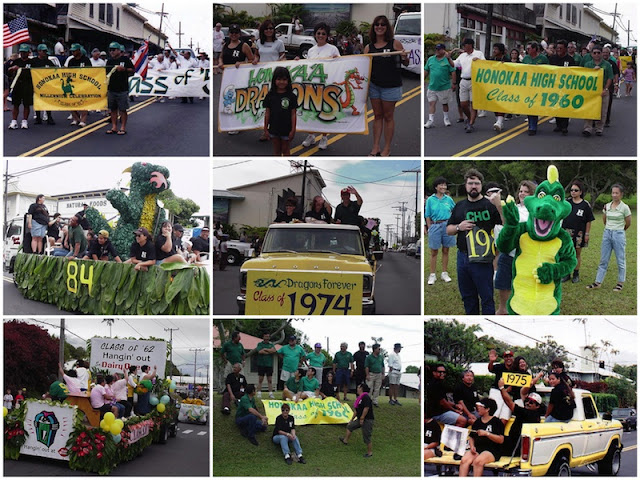