Friday 5 for September 22: I Don’t Get It Either

Scrivener's Friday 5: Questions inspired by stuff I don’t get.

1. Twitch is an enormously popular livestreaming platform mostly for watching people play video games. It has more than 1.5 million broadcasters and more than one million visitors per month, and Amazon acquired it for nearly a billion dollars in 2014. Which of your computer activities would you livestream if there were a way to make some money doing it?

I was almost going to answer this as totally “none” but after thinking about the EDM answer below, why not stream the creation of a real time EDM mix? I don’t know if there’d be money in this, but barring the RIAA, it could be tried I guess.

2. EDM (electronic dance music) is usually performed by DJs on stage in front of audiences, playing tracks they’ve mixed, right off their laptops. If you were a push-button DJ playing your tunes in a club, what would be your opening and closing songs, assuming everyone’s there because they’re into whatever sounds you’re into?

I’d probably start out with “Hello” by Martin Sloveig & Dragonette and finish with some kind of EDM mash up of The Doors’ and The Beatles’ “The End” with a whole pile of stuff in-between.

How’s that? I’ve messed with this stuff on my Mac using Virtual DJ Home and “songs” off of Soundcloud, Jamendo and my own tracks on iTunes. Been awhile since I done one. There are way too many EDM songs and mixes out there to keep up with the stuff. Plus you kind of have to be in the mood and make time to do a mix… not to mention be confident enough that you are not going to mess it up!

3. What’s a good Adele song, and why is Adele so popular? 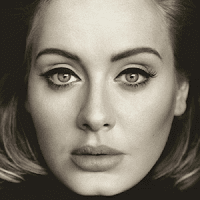 I have no idea why she is so popular, but I have to guess her music appeals to a wide demographic. Teen and college age girls, middle aged and older people like myself. Her music gets played on “top 40 CHR” radio as well as “Adult Contemporary”, “Soft Rock” and even some “Alternative” formats. So her appeal must be wide enough to cut across the age and demo barrier. Furthermore I think the critics and her peers love her. She’s got a bunch of Grammy Awards.  Plus her three albums are just like numbers corresponding to her age I think…. 19….. 21….. 25. I have 2 of 3 albums.

That all said my top 5 Adele songs:

Don’t ask me why I like the songs. They’re pretty good IMO and I have played them many times.

Oh I was a “Walking Dead” on the morning I had my heart attack. I was in pain, walked back to the car and called an ambulance. Help!

5. Every generation seems to arrive at a “They don’t write ’em like that anymore” attitude. Why does it seem like most middle-aged people lose interest in new music?

A verse right out of the Greg Kihn Band’s “The Break-up Song”... heh… Why do middle age people lose interest in new music? Well since I am a bit beyond middle age I think, and was part of the walking dead (in the question above) I may be able to offer this speculative answer:

It’s generational. The succeeding generations are seeking their own type of music and would rather disassociate themselves from the music their parents liked, especially during the teen and college aged years. They found their own music. They are going to stick to it, nurture it and cherish it in the years to come.

Funny thing about that, as they age, they hold on dearly to the music they grew up with and when their kids start listening to weird crap, the former youngsters who are now the parents and near retirement, hold on to the music that they associate with memories of their life just as dearly as the generation before.

It gets to a point that “hey I don’t want to listen to that rap crap you’re into” and they stick to familiar stuff like The Beatles and Led Zeppelin. Imagine this: A lot of senior citizens have now grown up on rock n roll.

Their ranks will get larger as The Rolling Stones generation of baby boomers age and stay in rest homes, still trying to rock out to Mick Jagger but excluding modern artists like Justin Beiber, Taylor Swift, Kendrick Lamar and others. Am I making any sense here?

I kind of consider myself sort of the exception as I have incorporated some of the newer artists into my music collection and playlists I often create on my iTunes and Google Play Music.

Perhaps older people just don’t want to “discover” new music, because the way we used to do music discovery was mainly through the radio. Today radio is targeted for younger people and skews heavily toward the “Urban Contemporary” format meaning that you will get way too much hip hop music… which to people of my generation is like, no dice… not for long stretches of the broadcast day.

So we turn to more melodic formats such as “adult contemporary” (which lately is skewing more towards a CHR 1990s plus demo), “classic rock” and “oldies”. One thing about “oldies” is that oldies radio doesn’t play much 1950s and 1960s rock n roll since a lot of people in those demos are not listening to the radio. Stations can still make some money on 70s and 80s music though not as big as before.

Younger people are more foolish spenders so advertisers rather reach them than the reserved adults who don’t spend as much. Hence more hip hop music.

Variety is still the spice of life. I jump from format to format with streaming services such as the free Accuradio site just to listen to music that is different. They have a wide selection of music formats and eras you can listen to. Check it out.

I’ve rambled on too much here… Bottom line is that old fuddy duddies will mostly stick to the music they grew up with to the exclusion of trying something new. It probably gets to the point where the new music of today is just “noise”.

Labels: Friday 5, I don't get it, meme, music, trivia questions, whatever