"Hello!  And welcome to this week’s Friday 5!  Please copy these questions to your webspace.  Answer the questions there; then leave a comment below so we’ll all know where to check out your responses.  Please don’t forget to link us from your website!"
Here are the questions and my answers....
1. How good are you at word games, and what’s a word game you really enjoy?
I don't know. I rarely play Scrabble or do a crossword puzzle. I am ok at crosswords but far from great. 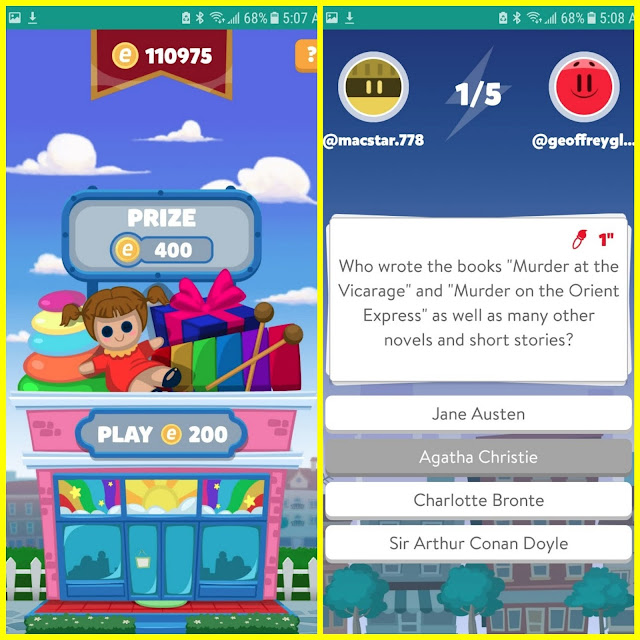 2. How good are you at trivia games, and what’s your strongest category?
I am a little better at trivia games. I have been playing Trivia Crack a lot on my Android phone. It's a good way to pass idle time. I  have 110,975 points accumulated in the trivia rush games within the app. I guess that is good. You play against people in a quick round of trivia questions. It's been ages since I played Trivial Pursuit.
I generally do good in the history, arts, geography, and entertainment questions on older movies, TV shows and music. I suck at sports questions.
3. How good are you at spot-the-difference or what’s-wrong-with-this-picture games?
Not a fan of those types of games. Reminds me too much of work. What's wrong with the photo.... what's wrong with the sentence.... ugh.
4. How good are you at memory games, and have you ever played Simon?
I used to do good on Concentration.... card game as well as with an old app on my Mac Plus.  Never owned a Simon device. Never played with one. My sister had a Merlin device which was similar. Played with that.
5. What’s your favorite party game of all time?
I generally shy away from all party games. Not a big fan of parties.
Bonus Questions: I'll just answer it here since I cut and paste the entire thing to this blog.
How do we feel about the new A Wrinkle in Time film?
I heard of the book. Never read it. There was a Wrinkle in Time photo shoot many years ago. I remember that. Probably has nothing to do with the book. The chances of I going out to see the movie is slim since I find $13 too steep a price to pay for movies these days. The last movie I saw in the theater was Star Wars: The Last Jedi and before that Star Wars Rouge 1..... Except for Star Wars movies, I can't justify the high costs these days. Will add this on movies to watch someday if I can find it on a free stream or a cheap DVD.

Has your favorite book been made into a movie? How did that work out for you?

As a kid I always loved the book, The Little House. It is about a house out in the country upon which the city and all its associated development invade its space and how the house went from happy to sad to happy again. There is no movie that I know of made from the book.

Another book I loved as a kid was Where The Wild Things Are. I saw the movie on DVD. It sucked. Totally lacked the magic of the book.

As I got older books that I enjoyed after watching the movies were:

War of the Worlds (HG Wells) - Several movies made. The 1953 adaptation is the best. The Speilberg 2005 version was lame. There was a British version that was supposed to be fairly close to the book. I saw that and it was too long, and too low budget for what it was trying to do.

The Time Machine (H.G. Wells) - Read the book some years later than the classic 1960 movie which is fairly accurate to the movie up to a point. The book goes a bit beyond the movie's timeline. Love both.

2001: A Space Odyssey (Arthur C. Clarke) - When I first saw this movie as a kid, I thought it was really neat and trippy. Very futuristic for the time I saw it which was in 1968. Did not understand everything I saw in the movie even after a few repeated viewings. After I read the book, everything was made much more clearer.

I read the following 2 books before the movies were made:

Dune (Frank Herbert) & several sequels afterward. Loved the first 3 books. The 1984 movie movie was a mess as far as the story went. Too much was crammed into 2 hours which missed a lot of details. Ugh. Disaster. Around 2003 a mini series was made... that was a little better but not as good as the books.

The Martian (Andy Weir):  Listened to the entire audio book several months before the movie came out. It played out more like a daily blog entry and it was great. The movie was very good too but a bit different. A couple of things from the book was cut but in all, I enjoyed both the book and movie. They are essentially the same but still different.

I like science fiction.
Posted by Mel at 5:14 PM