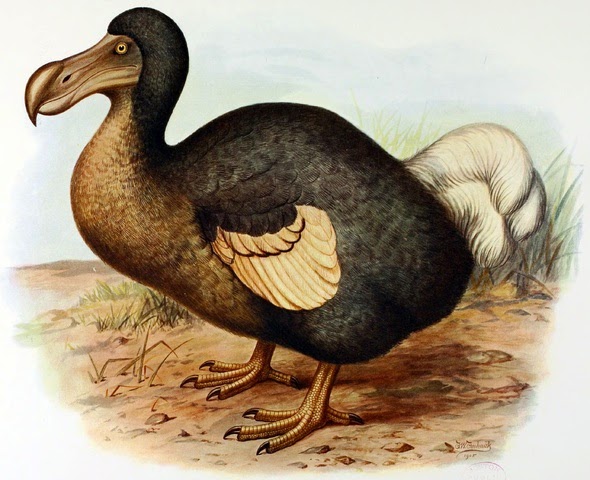 From Scrivener's Friday 5 site: "Hello, and welcome to this week’s Friday 5! Please copy these questions to your webspace. Answer the questions there; then leave a comment below so we’ll all know where to check out your responses. Please don’t forget to link us from your website!"

1. What’s the coolest of the extinct animal species?

For this exercise I'd go with the Dodo bird. It definitely was not cool and was probably the ugliest bird that ever existed on Earth. The thing couldn't fly, had no natural predators on its home island of Mauritius, and fell prey to non-native animals such as rats and pigs. They were hunted by sailors for food. The bird became extinct in the 1660s.

Speaking of dodo's, I know a few humans who would qualify as such. Hah!

2. What classification (however you want to define that) of human being seems to be an endangered species?

My family line. We don't have much children after the current generation so my kind are definitely endangered. Otherwise it has been noted that in 200 to 300 years, blond people will become extinct due to a lot of interracial births.

3. How do you feel about the disappearance of the neighborhood video rental store?

I don't miss it as much as the record store. Both record and video stores were good places to browse and if motivated buy music or a movie. Today we got streaming which is what seems to be dominant. Back in the day I preferred to buy vs. rent since I usually always forgot to return the video on time.

I think CDs are better than pure digital files.
Plus you can get many used ones like this for as low as $1.00.

I like compact discs better than just plain old MP3 or AAC files you purchase or download online. Today some used compact discs can be bought at a dollar each which is way cheaper than buying only one single track as a downloadable file for $1.29 each.

But then again, I still like and hold on to a lot of my old vinyl records. Records are cool to play and they come with big graphics and information that you don't get with many CDs and almost not ever with digital.

When it comes to single song purchases, with vinyl records you usually always got two songs (A side and B side) for the price of one, no matter how much they charged for that single. And some of those B-sides were killer tracks that never appeared on record albums and CDs until years later when the record company or artist issued them on an expensive compilation album.

5. What no-longer-available snack item do you miss most?