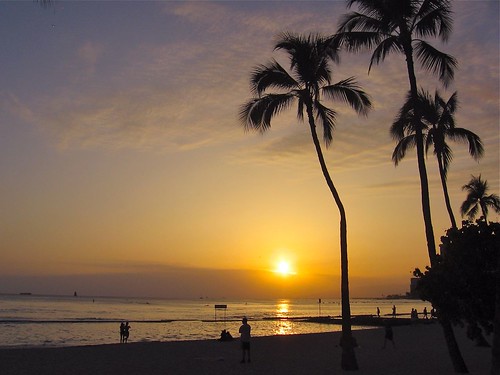 The pleasant warm weather in Hawaii is usually lovely.

1. What’s good and what’s bad about the weather lately?

Good - Here in Honolulu our weather is like 97% good. Clear sunny skies usually, light trade-winds, and an occasional shower or two.
Bad - The pleasant weather comes at a price - high humidity, heat.. which means running the AC in house. That can add to the price of your electricity bill. Otherwise the only really bad weather we have is the rare hurricane with destructive winds exceeding 75 mph.

I like old sci-fi B-movies. Those films had a lot of anti-nuclear paranoia or alien invasions in their story lines, most of them produced on a shoestring budget.

Some of my favorites include "Angry Red Planet", "Panic in the Year Zero", "Reptilicus", "Island of Terror", "The Man With the X-Ray Eyes",  "The Time Travelers", and "Crack in the World". From the horror genre, "Monster in the Closet", "Ssssss!" and "Night of the Living Dead" (the original 1968 movie).

3. What’s something that used to be bad but now is good?

Can't think of anything. Bad is bad, and good is good.

4. What are some of your pet words for very bad and very good?

Very Bad - "Oh shit", "crap", and of course "fuck" which is used in a variety of ways.
Very Good - "Cool", "Nice", "Love It, "Good, goood" and pretty much anything else that projects a positive feeling.

5. What’s your favorite song by Bad Company (or Good Charlotte, if BadCo isn’t your style)? *

BAD COMPANY - When I look at my iTunes music plays I have to say "Shooting Star". It has the most plays from all their songs. There are others that I also like including "Can't Get Enough," "Feel Like Making Love", "Bad Company" (album link), "Silver Blue and Gold", "Young Blood" (album link) and "Rock n Roll Fantasy".... yep pretty much stuff from their albums of the 1970s. Lost track of the band in the 80s.

BADFINGER - "Baby Blue" (always loved this song from way before Walter White met his fate), "Flying" (B-side of "Baby Blue"), "Day After Day", "Without You" (this is the original; later covered by Harry Nilsson and Mariah Carey), "Come And Get It" (money!), "Perfection" and "No Matter What". They may have been "the next Beatles".

BENNY GOODMAN - I have a few tracks from him but can't remember the titles.

BAD BRAINS - I remember when some of their songs were played on Radio Free Hawaii... not really my cup of tea. Can't even name one song.

"Thanks for participating, and have a goooooooood weekend, and all the world will love you just as long as you are a shooting star!"