Friday 5 for September 28: Over Under Sideways Down 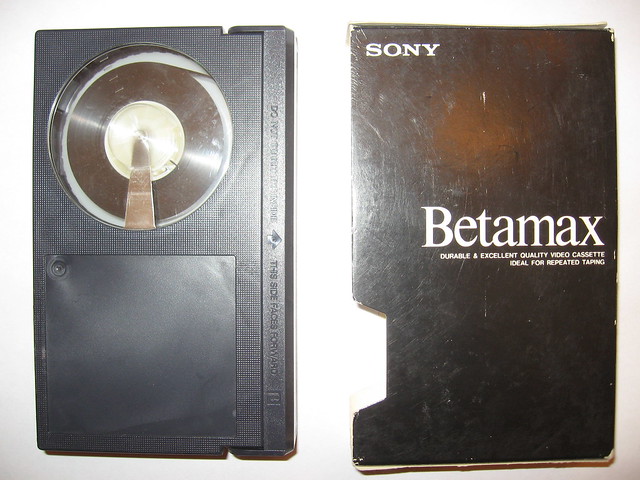 Betamax. VHS tapes. Collecting movies in general. Got rid of plenty of them in the last 2 years. Had to de-clutter my home. Got rid of a lot of DVDs too... though I still maintain a smaller collection of movies I like... However, I am not buying anything new. There are some places that stream movies for free, so there are plenty of old ones I can watch.

I am also so over actually going to the movies in a theater as prices keep on climbing higher and higher. The price of movies are now more than DVDs that you can buy in the bargain bin at WalMart. But again, I am not buying movies. Or TV shows. No time to watch em all.

The only movie I plan to see in the next year or so is "Star Wars 9".... whatever the the title is.... that is next year... and after that, I will call it a day for Star Wars... I am getting way too old to be waiting another six to eight years for another story arc to roll out in the next trilogy.

I'll probably get that one just to finish off my collection of the current Star Wars trilogy. And then I'm done.

Another thing I am totally over is iOS devices. I have an iPod Touch that I bought in 2010. It is an abomination that I cannot easily change out the battery. What I hate is built in batteries! Arrrrgh!!!! So yes, no iPhones for me. You spend hundreds of dollars for the damn things and in 4 to 5 years the battery slowly loses its charge and then dies... and you can't easily replace it like you can with several Android phones and older thicker, dumb phones.... Plus what is this crap about getting thinner all the time!!!! I think I would prefer thick since it is not as fragile as thin. How many of you have dropped and broken your thin smartphone? Or bought a sleeve to make it.... well... thicker? Isn't that stupid?

2. What’s something you’ve got under wraps?

Nothing at this time, and nothing that I would want to publicly disclose.

3. What does it take to get you sideways, and what’s your preferred method?

After looking up the definition of this slang word, I can say that I don't do alcohol... none at all... BTW, I never heard of this as a slang word...

To me sideways meaning turning something vertical to horizontal... like if you are making a video with your smartphone, turn it to landscape mode and shoot it that way. I hate vertical videos.

4. What’s coming down the pike?

5. What’s the last thing you read directions for?

Visual Composer which is an extensive module set used for creating pages and content on the WordPress platform. I recently completed transitioning an entire website off another server to a WordPress platform for one of the local, private non-profit organizations. I learned a lot of new stuff with this neat module for WordPress.

I'm sure this thing costs a lot of money, so I think for now I can't use it on my own WordPress sites. I should look into this.

Labels: down, Friday 5, meme, over, sideways, trivia questions, whatever