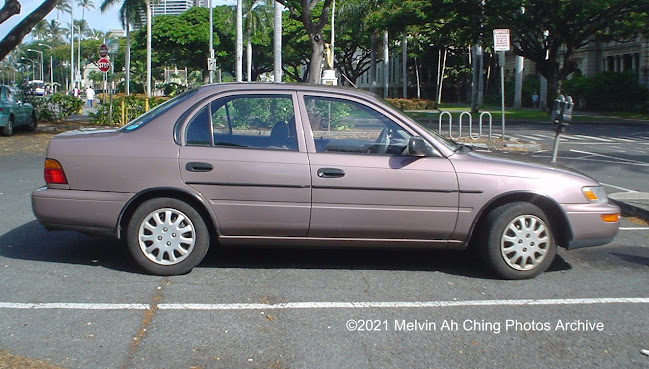 1. What tool did you most recently purchase, and what tool will you purchase next?

I recently purchased a Canon 100mm macro lens for my Canon DSLR camera at a thrift shop.

My next purchase? Probably sometime this year a Google Pixel phone of some sort. Haven't quite decided.

2. What toy did you most recently purchase, and what toy will you purchase next?

Toy I recently purchased? None, though last year someone gave me an old iPad. The thing is stuck on iOS 9.x, so it is limited to what it can do since Apple has long stopped supporting this OS. So the iPad is relegated to "toy status" since I have a bunch of useless games on it for when I want to veg out. The basic apps that came with the iPad works OK, so it is still good for some stuff... like camera, though it is kind of clunky to carry around and use it as a camera.

Next toy purchase? Huh... can I dream on for this... computers, new cameras and anything else expensive that I cannot afford will probably make good "toys", though I tend to buy these types of things because I need a new "tool". For now I am just putting all or most of them off for a later time.

3. What staple did you most recently purchase, and what staple will you purchase next?

Food is pretty much a staple.. and I will probably keep on buying more food in the future until the day I die.

I don't know what I will purchase next.

5. What are you most recently glad you did not purchase after consideration?

Not very recent but at one time I considered purchasing an Apple iPhone or an iPad... but the built in battery experience does not make the expensive purchase last very long. A shelf life of 5 years or less for anything made by Apple is abominable!

I have always had this unwritten rule. If you buy something that cost over $100 it should last at LEAST 10 years before it breaks or you need a new something of the same thing

Things that I have paid a lot of money for that lasted a long time (and I still have them)....

1993 Toyota Corolla - yes, Toyota makes good cars, at least the older ones. I don't know about the newer models with all the computerization built in.

Power Mac G4 tower - Still works, bought it new back in 2001. Though I hardly use it, when I want to boot into something with Mac OS9 or an older version of OSX, it is still there. Unfortunately the monitor went bad about 5 years ago, so now I have to use a standard VGA monitor with it. Still good for what it is.

MacBook Pros (2009 and 2011 models) - Bought these brand new, and they still work, despite the built in battery.

Canon Digital Rebel 6 DSLR - Bought this in 2011 and 10 years later it is still working. The batteries are removable! Yay!

I have several other older digital as well as film cameras, and all of them still work. My Minolta XD11 and X700 are two of my favorite film cameras and both still work. Bought them years ago. And someone also gave me an old X700, more than 15 years ago, and that still works! Yay.

Other things that I own that still work and stood the test of time for longer than 10 years... Technics turntable, Optimus Cassette Tape Deck, and Tandy analog mixer among sound system stuff.... appliances? Kenmore refrigerator... had that since 1986 and it still works!

That all said, why don't many devices today last a long time????

I was most disappointed with my Apple iPod Touch 4 that I bought back in 2010. It cost $500 had 64 gigs of storage and worked fine with most of the same apps that you could run on an iPhone. However after 7 years, the battery started going and about a year later the dam thing would not even boot up, even connected to the AC circuit. Ugh! I should have known that damn built in battery would not last.

The same fate has rendered most of the 7 standard iPods I have of different models useless or nearly useless. The built in batteries have either lost the ability to hold a charge at all or can only be used for 10 to 15 minutes before the battery has to be recharged.

Those batteries like those of the iPod Touch and other Apple iDevices are all sealed in shut and cannot easily be remove and replaced by owners. This practice really sucks. The iPods were great players... but the shelf life is just too short. The same can be expected for all new iPhones, iPads, copycat Android devices that have also adopted this stupid Apple mantra of sealing the batteries in.

Consumers should have the option to buy the same type of devices with removable batteries.

But I get it. It is manufacturer's desire to sell us products with built in obsolescence. The built in battery is just the ideal symbol of that built in obsolescence, which is followed by too frequent operating system upgrades that eventually render useful devices useless, especially if that device has to connect to the internet.

I hate built in batteries.

Sadly if I want to get something new like another Android phone I will probably have to get one without a removable battery. That is a major reason why I do not want to buy a really expensive phone. Planned obsolescence is a bad thing.