Friday 5 for December 3: The work of the child

"Hello, and welcome to this week’s Friday 5! Please copy these questions to your webspace. Answer the questions there; then leave a comment below so we’ll all know where to check out your responses. Please don’t forget to link us from your website!"

1. What musical instruments have you played?

- Dabbled in piano. Can get by... but not good and I don't have a piano at this time though the electric keyboard I have at my place, I don't know if it works. Belongs to my friend Lisa.

- Mac Plus computer: translated a song I wrote in college to the Mac using a very crude software in 1990. Converted that to mp3 and you can listen to it here.

2. When do you play with your food?

I made pancakes several years ago shaped like some of the Hawaiian islands. 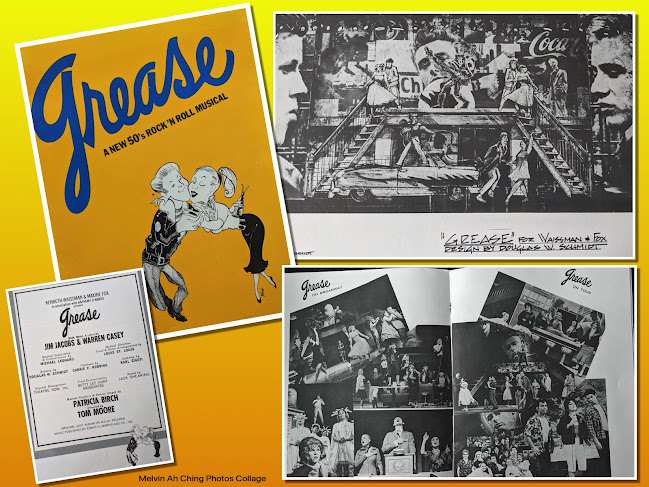 I haven't seen many stage plays. That said, back in 2017 I won tickets to see Diamond Head Theater's production of Mamma Mia... I thought it was good and I like the music of ABBA... so that had a lot going for it.

Saw South Pacific and Bye, Bye Birdie as college productions. Loaned the Birdie cast an old camera for a scene with the press in it.

In 1974 when I went to New York City for a few days, we got to see a relatively unknown Broadway musical called GREASE. I still have the souvenir booklet for that. Some of the photos are included at the top of this post. The musical is different from the movie that came after as new songs were added to the film version in 1978.

4. What games do you play on your phone?

I don't consider myself a hardcore gamer since I don't play any of those big games that seem to last forever and asks you for more money. Ugh! However I like simple casual games that I can play for a few minutes, die and then play again later.

I have four functioning cell phones of which only two have official service. The other two are wifi only and are used only at home. The Samsung can still make wifi phone calls but the Alcatel with its very aged Android 2.7 can only do rudimentary internet, play simple games and of course doubles as a music player.

Kai OS Basic Phone - Alcatel Smartflip - There are a ton of games on the Kai OS ecosystem, all simple game apps geared toward basic phones. I have a handful of them including Snake, Mahjong, Tetris-X, Endless Aliens (Galaxian clone), Fart, Fart Pads

Apple iOS iPad Mini - Someone gave this to me in 2019. It's a 2012 iPad Mini that has been largely marginalized by Apple with very little app support. I hate Apple for making things obsolete so fast, especially when devices still work.

On my iPad I have the following game apps:

Airplane Fly Hawaii - used to be my favorite game until I conquered all of the levels acquiring every plane they have in the fleet after many successful flights and landings. Sadly the game is no longer supported by the publisher, so there are no updates for any system. I used to run this on my Samsung J7 phone, but since it only has limited space for apps, I deleted that and all other games and just went with core apps that I needed.

Otherwise the usual suspects - Mahjong, Solitaire, Checkers and 94 Seconds, the latter of which is a timed trivia letter matching game. I used to do that one on my old iPod Touch that has since died (I hate non-removable batteries).

Nintendo DSi - This is one of my favorite gaming devices, not because I am a hardcore gamer. Way back before I owned a cell phone, I used this as a portable internet device. You could access websites with the built in Opera web browser on open wifi networks, including my own at home. Over the years as the web became more secure, the Opera browser which was built in was not supported after Nintendo deprecated the platform around 2016. I bought this device brand new back in 2009. I don't appreciate the short term shelf life of official support.

That all said, the games that I did buy online as well as a handful of cartridge games all work fine to this very day. Plus the thing has a rudimentary camera system, can play music files and supports SD card external storage. It makes a good music player and cheap ass camera with weird and goofy effects that still work via software.

The games I have for this thing range from something called Club Games, which a suite of many, simple games such as checkers, chess, mahjong, bowling, darts and too many card games to remember. Other cartridge games I own include Cats, a Las Vegas suite of games and one of old Atari games. Plus the few titles I did download from Nintendo when the platform was still supported: Stratego, Sudoku, a better Mahjong with good graphics, Absolute Brickbuster, Aura-Aura Climber, Pictobits, and Zelda Four Star edition which is the closest I get to one of those never ending role playing games... ugh.

The nice thing about the Nintendo DSi is that it still works. I can still do some web browsing with it as long as the site is text only... think a lot of old Gopher servers. Heh.

Bottom line is that I am not good in any of the games save for a very few. But they end up as being fun, short-term distractions.

If you have an old, out of commission cell phone just sitting around in a drawer, it is a good idea to put it into a secondary use, such as a games platform or a music player.

5. When did you recently play it by ear? 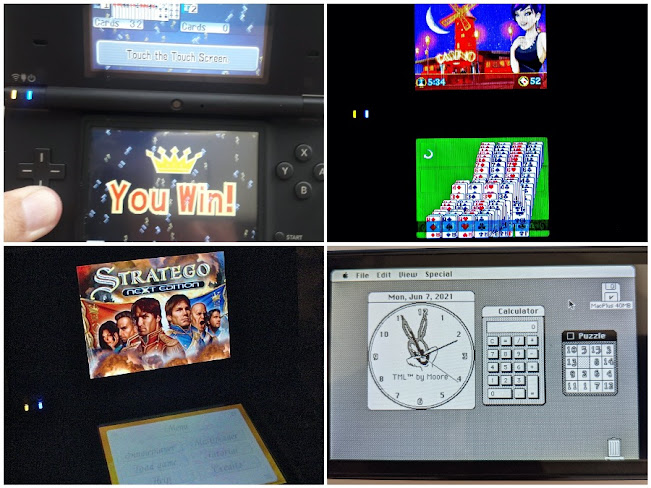 Games on my Nintendo DSi and the Mac emulator on my old 3G Alcatel 960C smartphone.
Posted by Mel at 12:05 PM