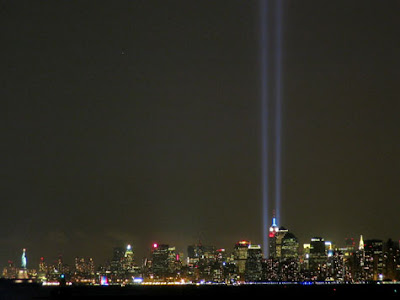 Found this most timely Friday 5 set at Cinn's Friday 5.

I was at home asleep in Hawaii but woke up to unusual chatter on our talk radio station. Turned on the TV shortly after and "oh my God!".... For us in Hawaii the attacks occurred at the 3 or 4 am hour. Most people were asleep. After we got up, we were all glued to the TV with edgy caution, disbelief and fear that day.

[02] If you live in or near the three cities, have you been to the memorial sites?

Nope. I live too far away. We have a couple of memorials in Honolulu.

[03] Do you think our country is more or less safe than that date eight years ago?

Safer thanks to the efforts started by the administration of President George W. Bush.

[04] Do you think that the Obama administration will be able to keep terrorists at bay as effectively as the former administration?

I hope so. But I don't trust our current president.

At work and perhaps reflecting on this later this evening.
Posted by Mel at 7:30 AM